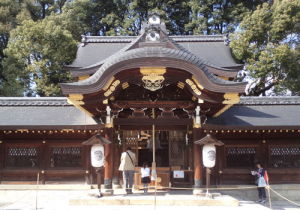 At the Heian period, Japan had been eager to import various kinds of advanced techniques and culture from China. People in Japan wanted not only just accepting the original ones but also developing various kind of craftwork based on the originals. Japanese regime at that time established craftwork studios in old capital city Kyoto and then newly developed techniques there extended nationwide. This is the reason why we can find many chances to see traditional craftwork in Kyoto. 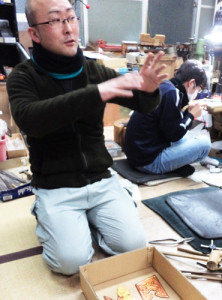 I got to know Mr. Shota Goto who is a traditional craftsman in Kyoto. He gave me his name card with his studio name ‘Goto Shaji (shrine and temple) Kazarikanagu (decorative metalwork) Seisakusho (Studio)’. Kazarikanagu includes kugikakushi or a metalwork for covering head of nail on the wall, metalwork for fusuma door pull, and metalworks for decoration and preservation at temples in Japan. Everyone living in Japan must have seen some of them at least once in his or her lifetime.

Mr. Goto mentioned that he knew he was destined to succeed to his family business when he was in kindergarden. He is the third generation of the studio where his grandfather established. Mr. Goto was taught by his grandfather when he was under training.

His grandfather was the third son of a temple master in Tottori prefecture located in the northwestern coastal area. He was fascinated with a portable shrine with decorative metalworks at his hometown and made up his mind to be apprenticed to a master of decorative metalworks in Kyoto. Later he became a meister and established his own studio at Rokujyo street in Kyoto. His son, Mr. Shota Goto’s father, moved the studio to the center of craftwork complex in Yamashina, Kyoto where Mr. Shota Goto works at present. 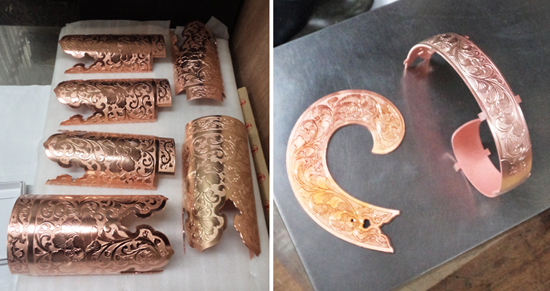 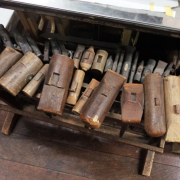 Decorative metalworks are mainly made of copper. Copper is easy to bend and shape when applying heat. The decorative metalwork is processed with the following steps. First, craftsman cut a copper sheet into small pieces by board cutter or scissor. Then, the small piece of copper was tailored to the target product by chisels and metal files. You can find many tools which were taken over from retired craftsmen. He also often made tools by himself.

Gold leaves were gilded after the surface of the product had been decorated. Mercury was used as a bond. There was a small room at the back of the studio for gilding. A special equipment to prevent mercury from vaporing into the air. Mr. Goto mentioned that using mercury was a traditional technique. Craftsman put gold leaf on the same surface of the product three times. Since decorative metalworks were hurt mainly by galling, three layer of gold leaf would keep it longer in the end. 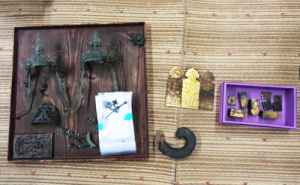 Mr. Goto has been engaged in the big project of Nagoya castle restoration for several years. He mentioned that renovation of such cultural properties would be more challenging than normal tasks. For example, he had to make many prototypes to build some decorative metalworks which would be the similar texture among the preserved ones nearby which altered its original color and covered by green copper rust. As well, he often drew a plan of a metalwork from scratch based on the preserved ink impression of it. Of course, he had to make hundreds of the same metalworks by hand. 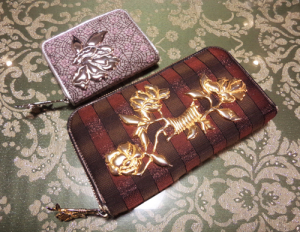 He engaged in not only these traditional works but also developing new products. For example, he has been made a wallet with decorative metalworks. We can find the metalworks on the surface and zipper pull and body of the wallet was made from Nishijin-brocade.

Traditional craftwork techniques should be transferred to the next generation, I believe. However, Mr. Goto has been worried about apprentice issues. He had had some apprentices before but most of them had been given up very early these days.

One day a young craftsman came to my apartment to fix the door, when I lived in Germany. He looked very young, I would even say him a boy. But he was responsible for the whole repairing job and took even a younger apprentice of him. At that time, I got to know that I observed the famous German meister system on site. In Germany, young men and women who want to be a craftsperson can start to learn craftwork when they are still teenager. As well, German on-the-job and off-the-job vocational training system has been well developed to be able to transfer craftwork technique to the next generation. 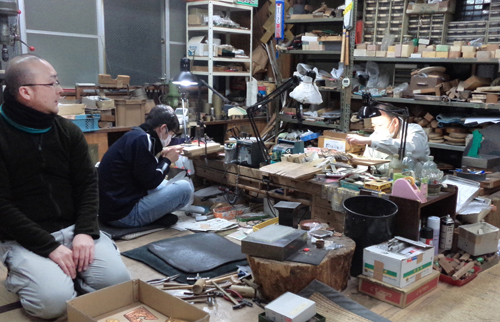 I consider that Japan still has many options to succeed to the traditional craftwork. The most important factor is for sure to keep craftsperson make a living with their own craftwork. Nobody would want to be a craftsperson without enough amount of expected income.

Cheap products are not always fine, although we can find many discount stores nationwide. As a consumer, we must be reasonable to give a certain payback to the craftwork like Mr. Shota Goto makes with long-term standpoint. 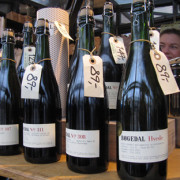